I went on what turned out to be a rainy, overcast spring day. 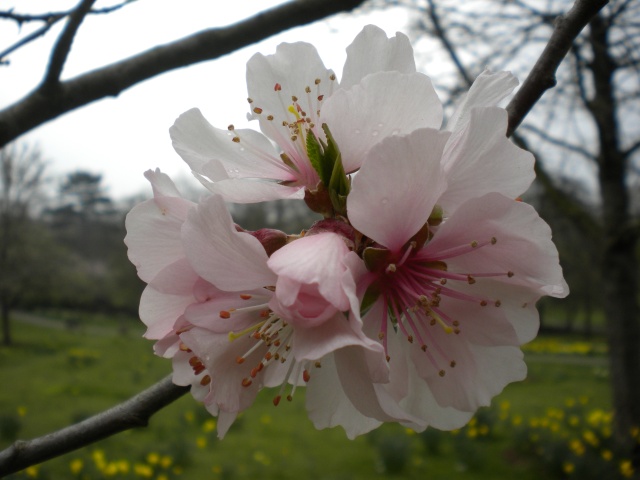 One of my continuing obsession with close-up photos of flowers. I've gotten in the habit of drawing them, perhaps to use in the PhD novel.

Hampstead is so large that it is difficult to get a hold of it, to see it as anything other than a long stretch of green interrupted by water features, hills, and even houses. I was surprised that neighborhoods–mansions even–abutted it, almost as if the Heath were the back garden to these houses. But I suppose that must be how large tracts of greenspace existed before large cities grew up around villages and towns. And London, being as old as it is, is likely to have spaces that have been kept for this purpose, rather than in newer cities where parkland has to be planned in among the houses and strip malls, placed where they aren’t a traditional part of people’s lives. 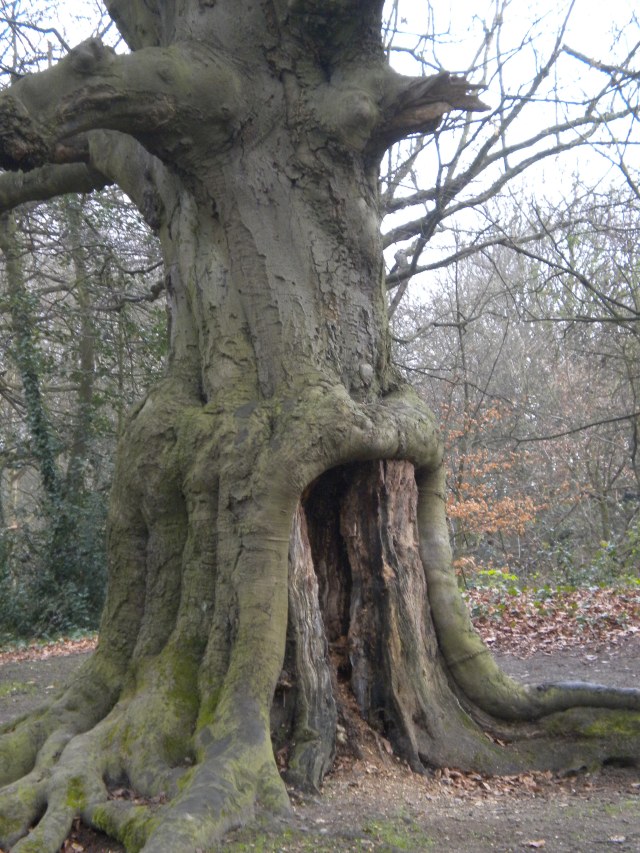 If I were feelign more romantic, I'd say fantastical creatures definitely lived in this tree.

Eight million people live here, and I see new faces–hundreds and thousands of them–every day. Yet on this day as I walked in the woods I came upon someone I met a few months ago in a class. For such a big city, it can be rather small at times. And that is, also, another function of a place like the Heath: it’s where people go to be anonymous, to be part of the bigger world beyond London’s borders and away from each section’s high street. 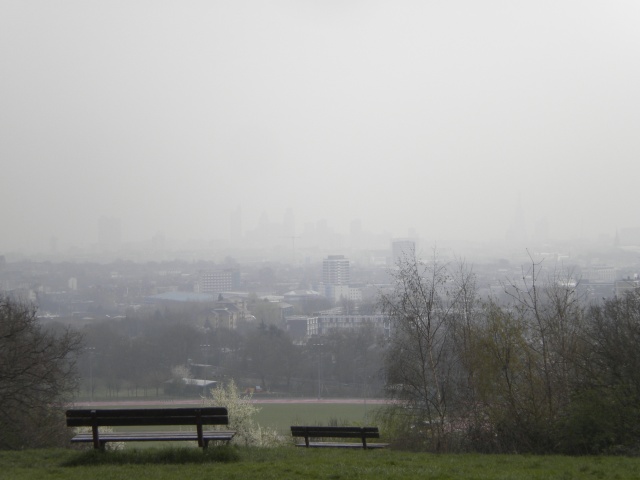 The view--a foggy one--from the top of Parliament Hill. When I was there I could recognize some of the buildings by their shape, but now they're lost in the haze.

From the Heath, London is ‘out there’ somewhere, rather than just across the road in each direction.

Posted on February 25, 2011 by Walking the Labyrinth

To start my list of new places to visit:

One, the Church Farm House, is right next to campus. I’ll likely take a trip there this week.

Posted on February 17, 2011 by Walking the Labyrinth

Are gardens natural? Are they art? Can they be both?

Gardens are only so because they are placed inside borders, separating us from the wilds beyond. Left alone, they will go back to their wild “natural” state. But we like organization, order, clean lines, no weeds, consistency of height and color–or at least a plan of each, where the tall plants go in the backs of the beds and colors are chosen according to fashion or color theory (thank you, Gertrude Jekyll). These things are what make us “ooh” and “aah” over gardens; even when they are designed to look “natural” they have been well thought out, planned to look accidental. 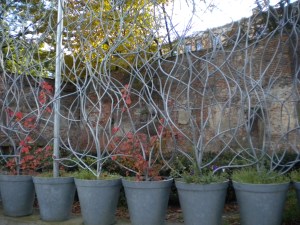 Metal pots and vines fence a garden in Brussels.

Does making a collection of plants conform to a planned design make them “unnatural”? If they are plants–and, thus, natural–then you can argue that a garden is natural if it contains plants no matter their form or shape or place of origin. In the eighteenth century, the landscape style of gardening was the height of fashion in England. The formal gardens at many large estates were torn up and replaced with gently rolling hills, trees and shrubs planted in clumps and drifts to mimic nature, serpentine lakes and canals, and specially created ruins and follies to attract the eye to far-off vistas. The landowners had nature re-created for their pleasure. It was still a garden, a collection of plants kept to a border–though a much more far-reaching one than before–and placed in a planned design. It was nature, it was “unnatural,” it was art. But it was still a garden.

Posted on February 6, 2011 by Walking the Labyrinth 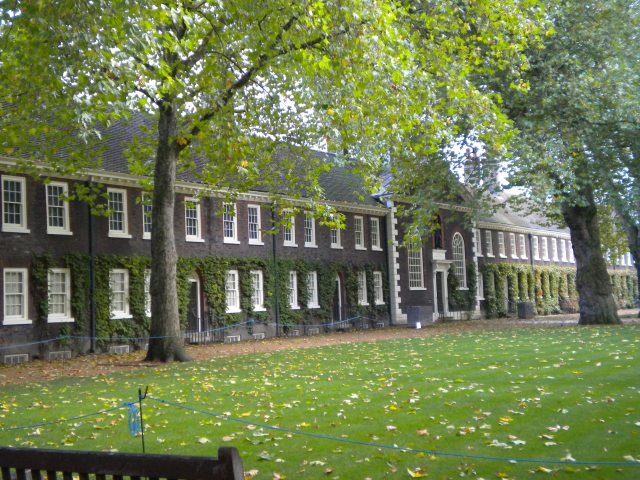 The Geffrye Museum, once an almshouse, showcases the changing interior of a “middle-class” home from 1600 to the late Victorian era. You walk from room to room (a series of dining and living room/parlors) to notice how the function and decoration changes with time. At one point, you encounter a garden room, a long space along the “back” of the house with windows and a mural painted on the interior wall. From here you can view the gardens.

In keeping with the changes in interior living over the centuries, the Geffrye has laid out a series of gardens to match. 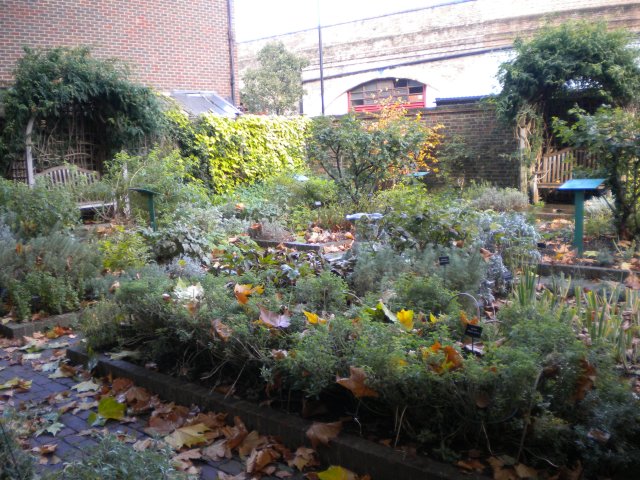 A knot garden in late autumn.

Again, another garden to visit in the spring/summer when it’s new and living within its borders!

The Geffrye gardens have identifying markers to describe the plants used for each era: Elizabethan, Mid-late Georgian, Mid-late Victorian, etc. There are plants and herbs for dyes, medicines, food and salads, cosmetics, and the household (often aromatic), and from one garden to the next the plants are often the same, indicating the tradition of handing down “receipts” from one generation to the next as well as the dependence the people of the past had on their gardens before food and medicine production became outsourced, as it were. 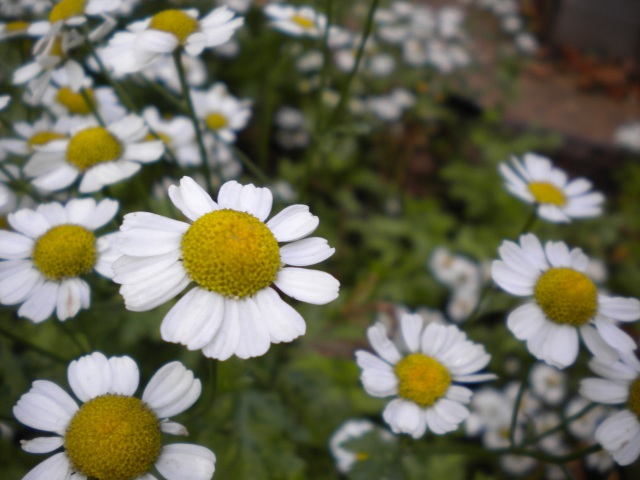 Chamomile, often used as a dye and medicinally.

The museum directs visitors to walk the exhibits inside in chronological order; the same is done outside, with paths that work–as paths tend to do–to keep you off of the grass and moving in an orderly fashion from one garden to the next. But because of the layout and the lack of walls, I could look up and down the garden and see the “past” and the “future.”

And that brings me back to borders. A garden is only a garden because we keep it inside borders that we set, but the plants will always grow beyond those artificial restraints. They’ll grow up and over and remind us that our image of a perfect garden is something frozen in time. From one year to the next–from one week to the next–the garden is not the same, but it is always a garden and always in the same place. And that has me imagining the garden in my novel as made of layers, each “garden” (from 1600 to 1750 to 1880 to 1915 to 1950) existing simultaneously. Unlike at the Geffrye where the gardens are laid out along a path from one end of the space to the other, in the novel the place border keeps the gardens together through time, one on top of the other. 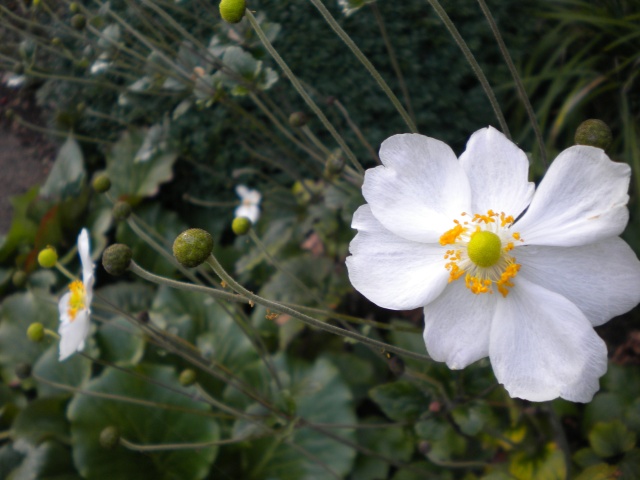 Posted on January 31, 2011 by Walking the Labyrinth

Not only is this a museum of gardening history but it’s also the final resting place of the Tradescants, John the Elder (1570s-1638) and John the Younger (1608-1662), botanists and gardeners who brought plants and trees to England from Europe, Russia, China, and America. John the Elder worked for the Cecil family at Hatfield House (this house’s history is the original inspiration for the PhD novel), and he even worked for Charles I. When he died, his son took over as the king’s gardener, but John the Younger ended up having to “hide out” in America during the English Civil War, when gardening on a royal scale wasn’t really the in thing, what with the king having lost his head and all… 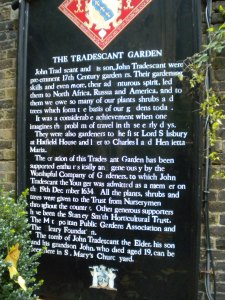 The garden behind the museum showcases a knot, a popular garden feature in the 16th and 17th centuries. While they’re attractive at the ground level (because it was late autumn, this one was looking a bit raggedy), they were often created to be viewed from the upper stories of the grand houses, a way of continuing the designs inside–on walls, fabrics, furnishings, etc.–into the view outside. They were part of a pleasure garden, indicating the extra space (read: not necessary for food production), money, and labor a landowner had at his disposal.

A knot garden in late autumn.

One vital detail to remember when thinking about gardens is that they are not static: they are made of living things. They grow. And growing things, especially plants, get out of hand. They get leggy. They bolt and go to seed. Weeds invade. Purposely selected plants invade each other’s spaces. Plants overgrow the boundaries. They die off in winter. 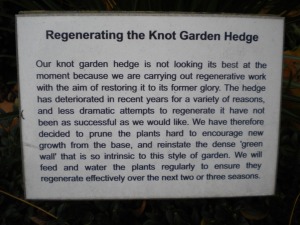 There is something significant about knot gardens in that, large or small, they represent one broader goal of gardening: to shape nature to your ideal. Knots are about control, clean lines. They are a way of claiming dominion over a plant’s true nature, of making nature into art.

Gardens are a border between the civilization of the house and the wilds beyond. And within that border are arbitrary borders: the edges of paths, beds for this vegetable and that herb, dividing lines between parterres and allees. Humans lay down a path and say “This, here, is the edge.” But borders are to be crossed, or they are not borders. 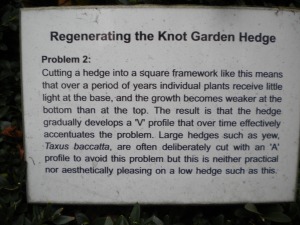 A knot is all border, a way of showcasing the gardener’s talents and the plant’s “natural” forms, what it can be trained to do. I imagine that its complexity was taken for granted, not only by visitors to the grand houses but by the homeowners themselves, who expected to be surrounded by beauty. This reminds me of the stories about Versailles (and, likely other royal palaces), where the gardeners came out at night to pick up all of the fallen leaves and blossoms so that the king (we’re talking Louis XIV, of course) would never see death and decay but only a garden in perfection.

But a garden, like anything in nature, is never *perfect*.